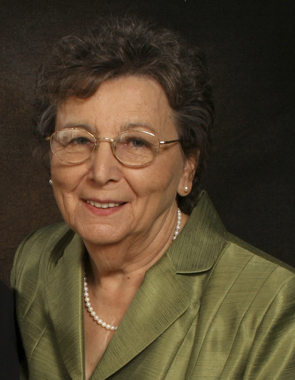 Back to Elisabeth's story

Elisabeth (Fink) Karner, 82, joined her Savior on January 5, 2020. Visitation will be held on Wednesday, January 8, 2020 from 9am to 5pm with family greeting guests from 4-5pm at Dighton Marler Funeral Home. Funeral service will be held at the Zion Lutheran Church in Stillwater on Thursday, January 9, 2020 at 9:30am with interment to follow at Arlington Memory Garden Cemetery in Oklahoma City, Oklahoma at 11:30am. Dighton Marler Funeral Home is entrusted with arrangements.
She was born near Leningrad, Russia on September 24, 1937 to Jakob and Therese Fink and spent her formative years fleeing across Europe to escape the darkness of WWII. She enjoyed a few peaceful years on the North Sea in Germany before her family immigrated to America in 1957, thanks to sponsorship from the Tolstoy Foundation. Eventually, Lis and her family settled in Luther, OK near her future husband, Franklin Karner, whom she married on March 19, 1960. Lis worked as a school nurse for Mid-Del Public Schools from 1972 until her retirement in 1998.
Frank and Lis shared a love for traveling and for three decades took tour groups to Europe. They enjoyed sharing their travels with family and friends. In addition to traveling, Lis enjoyed sewing clothes for her children and grandchildren, baking (her bread and her chocolate chip cookies were legendary), and gardening. She had an infectious giggle and welcoming smile that will be sorely missed.
The family expresses their sincerest appreciation to the wonderful caregivers both in Midwest City and in Stillwater who provided such loving and attentive care to Lis as her Alzheimer's progressed. During the course of her illness Lis received so many small kindnesses from friends, family, and total strangers that eased the burden of this difficult illness.
Lis is proceeded in death by her loving husband, Franklin; her mother; father; brothers, Viktor, Robert, and Erich; and sister, Kathe. She is survived by her sister, Luci; daughter Terri (Jim) Hollarn; son, Steven Karner; granddaughters Krystina (Chris) Phillips and Emily Hollarn; and great-grandchildren Callan and Esther Phillips.
The family requests that memorials be given to the Alzheimer's Association (www.alz.org), c/o Dighton Marler Funeral Home, 5106 N. Washington St., Stillwater, Oklahoma 74075.
Condolences may be sent to the family via an online guestbook at www.dightonmarler.com.
Published on January 7, 2020
To send flowers to the family of Elisabeth Karner, please visit Tribute Store.

Send flowers
in memory of Elisabeth

A place to share condolences and memories.
The guestbook expires on April 06, 2020.

Full Of Love Bouquet was purchased for the family of Elisabeth Karner by Mark and Karla Sisco.  Send flowers

Beautiful in Blue was purchased for the family of Elisabeth Karner by David and Jennifer Schneider.  Send flowers

A Full Life was purchased for the family of Elisabeth Karner.  Send flowers

Gary Williamson
Thinking of you and praying that God the Father who created this body; that God the Son who by his Blood redeemed this body; and that God the Holy Spirit who by His Holy Baptism sanctified this body to be His temple keep these remains to the day of the resurrection of all flesh.  Amen and amen.
View all