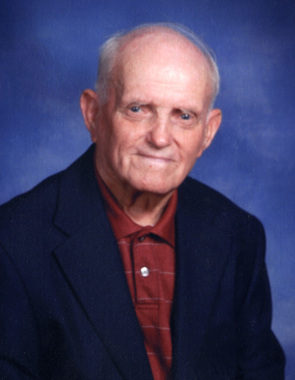 Back to John's story

John Malernee lifetime citizen of Cushing entered Heaven on January 19, 2020. John was the first child of John and Lorena Malernee, he had five siblings Georgia, Margie, Mary, Roy, and Ruby. He was born on May 26, 1921, grew up in Cushing graduating from Cushing High School in 1939. He was proceeded in death by his wife Ada of 50 years and is survived by daughters Carol Snow of Tulsa, Deena Brandenberger of Stillwater, and Cindy Brown of Drumright, Oklahoma. He also is survived by grandchildren Christy Jones of Cushing, OK, Greg Terra of Jarrell, TX, Calysta Alsborg of Travelers Rest, SC, Ilex Brandenberger of Medford, OR, and Kyle Brandenberger of Atlanta, GA and nine great grandchildren.
John was a lifetime member of First Assembly of God Church in Cushing where he served the Lord as deacon, Sunday school teacher, youth and adult leader. He also sang in the church choir for years and even met his wife Ada when he joined a Gospel quartet where he sang tenor. For years he and Ada traveled to singing conventions across the mid-south.
John was the owner-operator of Malernee Roofing Company for over 60 years. Although he was small in stature, John could outwork any two young men that ever worked for him. He had a reputation for doing high quality work in a challenging industry.
Fishing and camping were among some of his favorite hobbies and he enjoyed his time with friends and family during these outings. Of course he regaled his family and friends with his escapades which were often humorous and exciting. Although always happiest while in Oklahoma, John and Ada often traveled with family and friends to locations in Arkansas and across the United States. While traveling, rarely if ever did they make reservations for overnight stays, but relied solely on the "Lord" to provide a place to lodge for the night. The interesting result of this was that they always ended up with a good place to stay and their children continue to carry on this family tradition.
John had a great life in spite of the hardships of the times he lived, he would attribute this to his faith in God and his family and friends. His humor and liveliness will be greatly missed, but his family takes great solace in their hope of seeing him in the next life.
Published on January 28, 2020
To plant a tree in memory of John William Malernee Jr., please visit Tribute Store.

Plant a tree in memory
of John

A place to share condolences and memories.
The guestbook expires on April 26, 2020.

Anthony Hart
Johnny was a great man. Short of stature but a giant in character. The world needs more men like Johnny! One of the wonderful people I'll always remember from First Assembly in Cushing.
View all