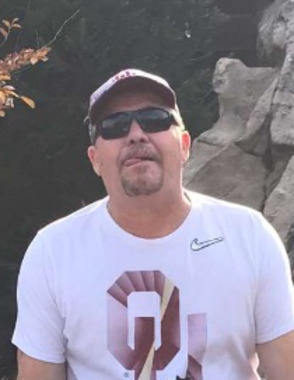 Back to Kelly's story

Kelly Wyn Mills passed away suddenly on Saturday, March 14, 2020 at his home in Stillwater, Oklahoma. He was 58. Services have been entrusted to the care of Dighton-Marler Funeral Home of Stillwater.
Visitation will be Wednesday, March 18, 2020 from 9AM to 8PM at Dighton-Marler Funeral Home of Stillwater. Family will receive guests from 6PM to 8PM. A Celebration of Kelly's life will be held on Thursday, March 19, 2020 at 2PM at the First Assembly of God church in Perry. Interment will follow at Grace Hill Cemetery. Pallbearers will be Shane Mills, Jason Mills, Ronald Wallace, Larry Wallace, Donavin Mills, and Kasie Dunagan. Honorary Pallbearers will be Hector Escobedo, Khris Mills, Dylan Misener Chris Dunagan, Sheldon Dunagan, Hector Eli Escobedo, Raiden Dunagan, Paydin Dunagan and Rocky Scoggins, Sr.
Kelly was born August 17, 1961 in Perry, Oklahoma to Richard Henry and Dixie Lee (Myers) Mills. He grew up in Perry and spent several years in the community. He joined the Navy on January 19, 1981 and served his country for the next four years before receiving an honorable discharge. On April 27, 1999 he married the love of his life Christi Wallace in Cozumel, Mexico. Some of his hobbies included; fishing, golf, shooting and working on his guns, softball, OU football, spending time with his family.
Kelly is survived by his wife Christi of the home; children, Shelbi Carpenter of Stillwater, Oklahoma, Lyndsi Carpenter of Wichita, Kansas, and Donavin Mills; brother, Khris Mills of Stillwater, Oklahoma; grandson, Hector Escobedo of Stillwater, Oklahoma; four nieces/nephews, Shane Mills, Jason Mills, Kasie Dunagan, and Jennifer Mills; several great nieces/nephews, Sheldon, Raiden, Paydin, Neveah, Addison, Laikley, Amanda, Rocky, Michael, Devin, Sylest, Essence, Jennifer, Jordan, Jessica, Kaylierae, Moses, Gracelyn, Wesley, Hunter, Skylar, Carson, Brody, Brayden, and Ariana. He was preceded in death by his parents; brother, Kevin Mills; one granddaughter, Skylar Fay Duncan; and one great-nephew, Duane Mills.
Condolences may be sent to the family via an online guestbook at www.dightonmarler.com.
Published on March 17, 2020
To plant a tree in memory of Kelly Wyn Mills, please visit Tribute Store.

Plant a tree in memory
of Kelly

A place to share condolences and memories.
The guestbook expires on June 15, 2020.