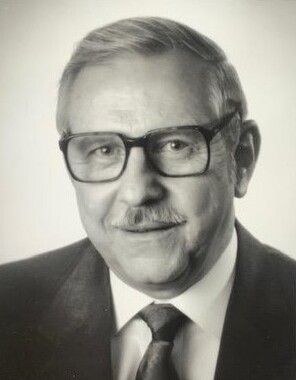 Back to Paul's story

He was born in Stillwater on June 19, 1928 to Charles and Ada Faye (Johnson) Ingersol. He graduated from Stillwater High in 1946.

He was active in church and was in his late teens when he was elected Sunday school superintendent of First Church of the Nazarene.

Paul and a brother worked their way through college by painting many Stillwater homes, including Coach Henry Iba's more than once.

He began teaching social studies at Ponca City High School in 1957 and assumed other roles: junior and senior boys counselor, student council sponsor, and yearbook sponsor. He was promoted to Assistant Principal, serving many years before retiring in 1995.

The Paul Ingersol Outstanding Teacher Award was established in 2015 to recognize a Ponca City teacher committed to improving students, staff, and community.

For years Paul returned to Stillwater weekly to mow his mother's yard and help her in other ways. He maintained close contact with extended family, the Nazarene church, and former classmates. Paul was a dedicated gardener and a congenial raconteur who was a favorite of his family, students, colleagues, and neighbors.

Condolences may be sent and an online obituary may be viewed by visiting, www.strodefh.com
Published on February 4, 2020
To send flowers to the family of Paul Johnson Ingersol, please visit Tribute Store.

Send flowers
in memory of Paul

A place to share condolences and memories.
The guestbook expires on May 04, 2020.

Florene Ingersol. Elston
Just now saw this I had talked with Carl and he told me Paul was not doing well! My thoughts and prayers are with the family!! I read his obituary and thought Charles looked so much like him!! Love to the family
J. D. Hanks
I came to PO-HI in 1969 fresh out of college to teach drafting and German. In some manner P.I. became a mentor to me,I never would have made it without him. He did more things for students than anyone could possibly count. Rest in peace my long-time friend and may God bless and keep you safe.
Tom Roland
"PI" was my counsellor for Student Council in 78-79. He taught more than classroom Social Studies! He taught us how to be moral, ethical, and most of all how to Love one another with fierce compassion and a suttleness of Grace! You will be greatly missed, my Captain!
Curtis Brown
Mr. Ingersol was a very special Teacher, Counselor and Friend to so many students from Po-Hi. We remember him with many memories. He lives on in our hearts and our lives.
Mary Steichen
A life well lived. He was the voice of encouragement to many, many students over the years at Po-Hi. He led by example and was a steady and stable presence for all. He will be missed.
Terry D. Going
Paul was Sunday school Superintendent when our family was new to the Church of the Nazarene. He was always a favorite with us young people at Stillwater First Nazarene, always showing an interest each one. He exemplified the character of Christ. I shall never forget him letting me drive his yellow Bellaire Chevrolet around the parking lot of Dad's service station when I was thirteen. He was a great man.
Larry Lake
I remember Paul Ingersol back in the 1960's in Ponca City High School. He was a very good man. My wife and I would see him on occasion in his later days at many of the local Ponca City Restaurants. I always enjoyed talking with him. He was very special in many ways he was one of a very few. We need more men like him..

God Bless Paul he is now with God

My condolences to his family
Justin Hoddy
I personally never had him as a teacher, but I used to see him around in the halls and always seem like a very nice man. Rest in peace Mr.
View all