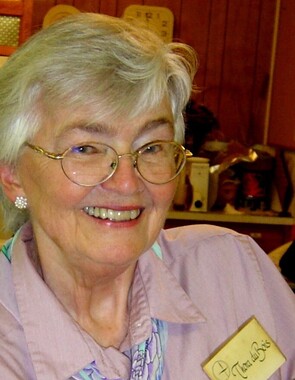 Dr. Thora Asgeirson du Bois was born September 4, 1927, in Winnipeg, Manitoba, and raised in the Icelandic community there. A superb pianist and beloved music teacher, she died January 16, 2020, at Golden Oaks Village in Stillwater.

Thora's lifelong love and study of piano and music began at age 6. Early lessons prepared her for Associate and Licenciate Diplomas in Music at the University of Manitoba's School of Music, and a Licentiate from the British Royal Schools of Music. In 1952, studying in Paris, France, she met and married her husband, Californian Ron du Bois, a studio artist and ceramicist.

By 1960 the du Bois family settled in Stillwater, where Ron taught art at OSU and Thora taught private piano lessons. Their family grew to include four sons, Paul, Marc, Jon, and Peter. Thora completed a Bachelor of Music degree at OSU and her Master's and Doctorate degrees at Oklahoma University. She continued teaching private lessons and joined the OSU music faculty.

After retiring from OSU in 1996, Thora continued to teach private lessons, play for the Unitarian-Universalist Church of Stillwater and perform. She played regularly at assisted living centers centers and, at Golden Oaks Village, played almost daily for her fellow residents.

Thora accompanied her husband Ron on three year-long Fulbright sabbatical trips abroad. Always an ambassador of good will representing America as she traveled throughout the world, she shared her talents, performing, teaching, accompanying singers and contributing to university music programs in South Korea, (1973-4), India (1979-80), and Nigeria (1987-80).

Interment will be 2 pm, Wednesday, January 22, at Green Haven Cemetery. A memorial service will be announced at a later date.

Memorial contributions may be given to the Ron and Thora du Bois Scholarship Fund through the OSU Foundation.
Published on January 17, 2020
To plant a tree in memory of THORA du Bois, please visit Tribute Store.

Plant a tree in memory
of THORA

A place to share condolences and memories.
The guestbook expires on April 16, 2020.

Claudia Mornhinweg
Thora was a beautiful person who was blessed with a musical talent beyond all imagination. She will be missed by everyone who met her.
OSU EMERITI ASSOCIATION
To the family of our friend and colleague, Thora, we offer our condolences and deepest sympathy. Thora was admired by all who knew her.
The Emeriti Association at OSU
Carol Olson
Thora was a true musician. Her legacy lives in every student she taught. These notes herein are evidence of the impact she made in her corner of the world. We are honored to call her Friend.
Carol and Kent Olson

Dawn of Remembrance Basket was purchased for the family of THORA du Bois.  Send flowers

Fran Toney Young
Sweet Thora will be missed by so many! When I was a Freshman in the OSU School of Music in 1965, Thora and I began a lifetime of friendship. She was the definition of lovely, and always so very kind. She took me into her family, as well as my husband and children as they entered the picture. I am so grateful to have known such a great and humble woman. May God be with dear Ron and Marc, and the many friends who will miss her.
Sandra Meyer
I first met Thora in the Holmberg Hall studio of the late Celia Mae Bryant at the University of Oklahoma. For at least a couple years (mid-late 1970s), our lessons were back to back, and of course we would greet each other every time. As the years went by, we both became involved with OMTA, and I looked forward to seeing her at many events. She was an incredibly sweet, kind lady whom I will never forget.
Andy Maxey
I will always remember Thora as one of the sweetest people I've ever had the privilege of knowing. She will always hold a special place in my heart and I will miss her greatly. My heart goes out to her family at this difficult time.
Rose Ratcliffe
Thora was such a lovely person, I mostly got to know her through OMTA and my music store Major Music. I was always delighted to visit with her!
kathryn Hickman
Thora was a very special person, She was always giving 100% to her students. I enjoyed her friendship and working with her on projects for various music organizations.
Sonja Hannon
Thora was a very sweet loving person. What a wonderful life she had!
Tana Del Prete
You are missed and loved Thora . Your charm , kindness , and graceful presence will remain with all .
I was privileged to hear you play Moonlight Sonata not so very long ago . That moment brought tears to my eyes . Rest peacefully .
View all