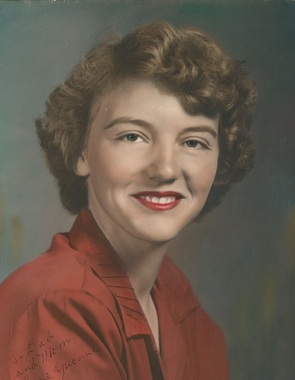 Back to Yvonne's story

Yvonne was born on November 6, 1937 in Blackburn, OK to Roy and Roseanna Ardella (Griffin) Robinson. She married Gerald Leroy Sanders on May 5, 1956, in Ponca City. He preceded her in death on October 28, 2013.

Yvonne liked to read and watch tennis. She also loved to crochet and was a past member of the Royal Order of Moose, Lodge 982, Ponca City.

She is survived by her daughters, Debbie Hamble and her husband John of Stillwater, OK, and Brenda Sanders of Ponca City, OK; her brother, Earnest Robinson of Cleveland, OK and several nieces, nephews and their families.

She was preceded in death by her husband, Gerald; parents, Roy and Roseanna; siblings, Bonnie Starrett, Jean Conn, Johnny Robinson and Ralph Robinson.

In lieu of flowers, donations may be made to the Ponca City Senior Center, 319 W Grand Ave, Ponca City, OK 74601. The family would like for you to leave memories of Yvonne at www.troutfuneralhome.com
Published on December 5, 2019
To plant a tree in memory of Yvonne Sanders, please visit Tribute Store.

Plant a tree in memory
of Yvonne

A place to share condolences and memories.
The guestbook expires on March 04, 2020.